In October 2018, Partido State University, through the University President Dr. Raul G. Bradecina and Dr. Ricky P. Laureta as Project Leader, entered into a collaborative research partnership with the Department of Agriculture Regional Field Office 5 (DARFO 5) under the Rice Program in the noble pursuit of creating sustainable farming geared towards a climate-smart and climate-resilient agriculture in the Bicol Region. 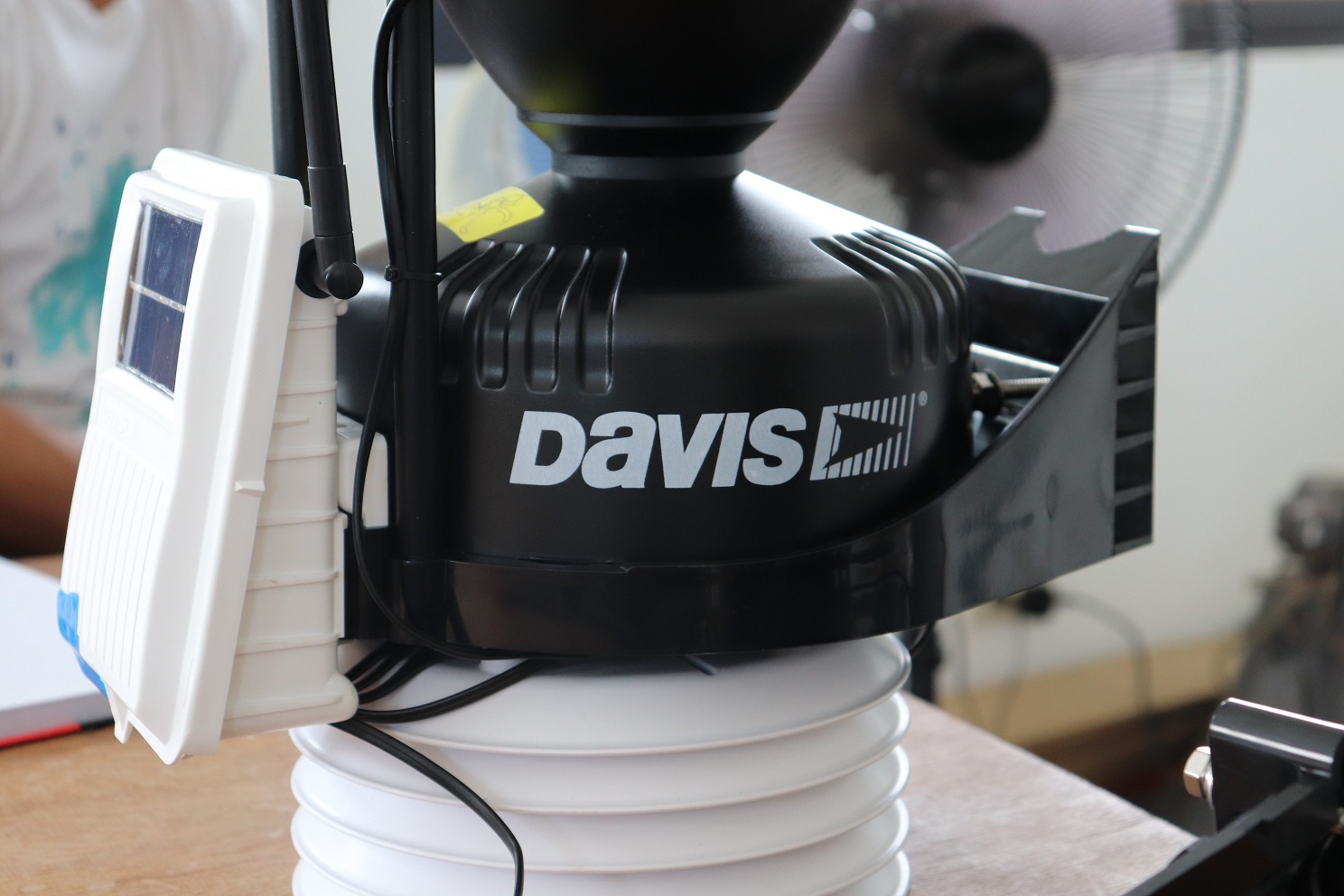 The research project entitled “Development of Comprehensive Early Warning System for Agri-Fishery Communities in the Bicol River Basin,” is a climate policy-driven endeavor that integrates agrometeorology and climate science into its implementation. The project aims to formulate policies on developing comprehensive plans in mainstreaming early warning across vulnerable landscapes in the Bicol River Basin (BRB). Said project has received funding amounting to Php 4,469,500.00 and has piloted various engagements and relevant activities since 2018. The project, heralding their second and at the same time concluding year of implementation this year, is proud to highlight their multiple accomplishments that transpired during the past year. 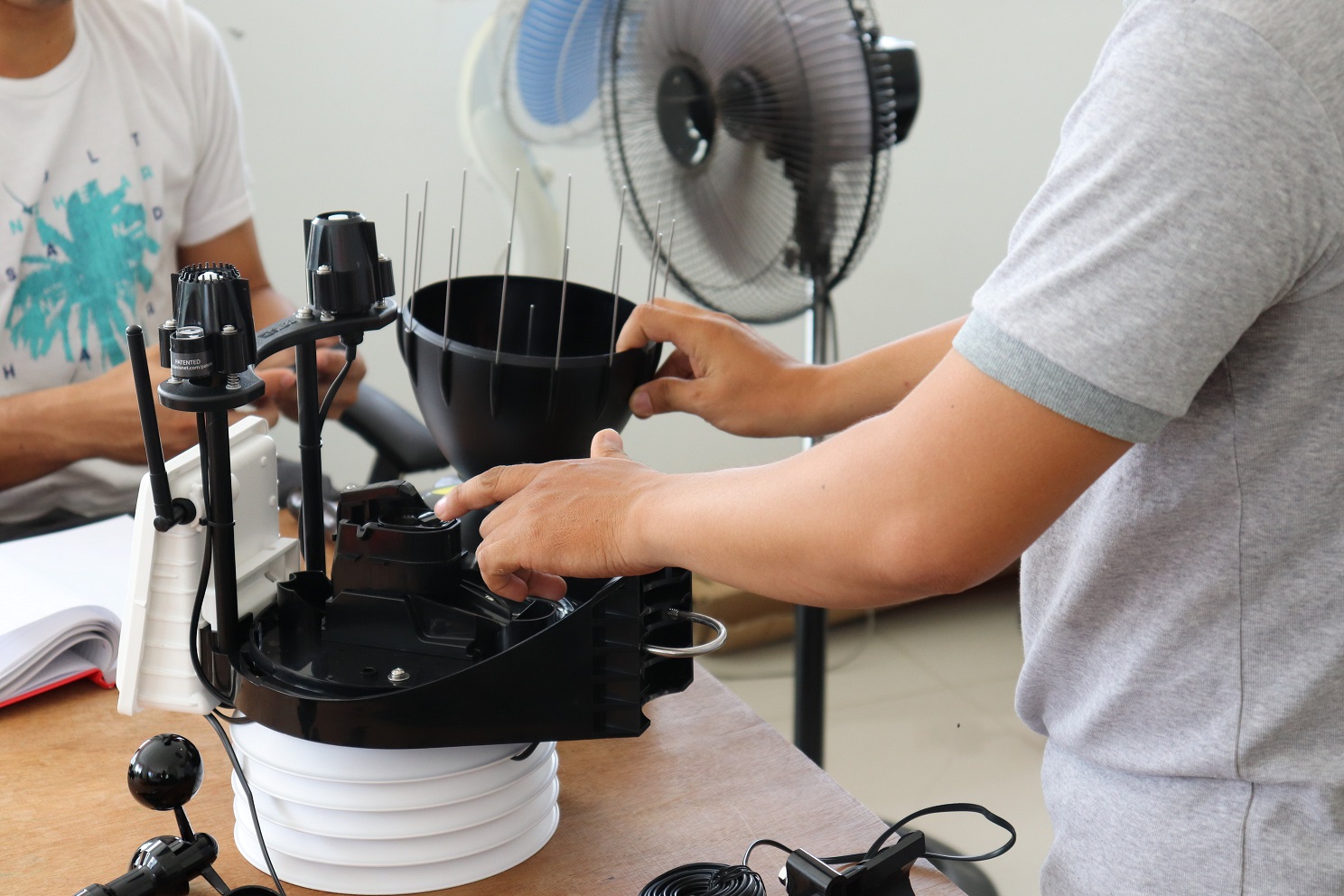 One of the project's core products is developing an early warning system (DEWS) across the three recipient project sites in Baao, Canaman, and Minalabac in Camarines Sur. Weather monitoring equipment called Automated Weather Stations (AWS) were established in these sites to generate relevant weather data like the amounts of precipitation or rainfall, temperature, humidity, and wind speed, among others. AWS helps record daily weather patterns essential in establishing the unique climatic environment of the respective municipalities. 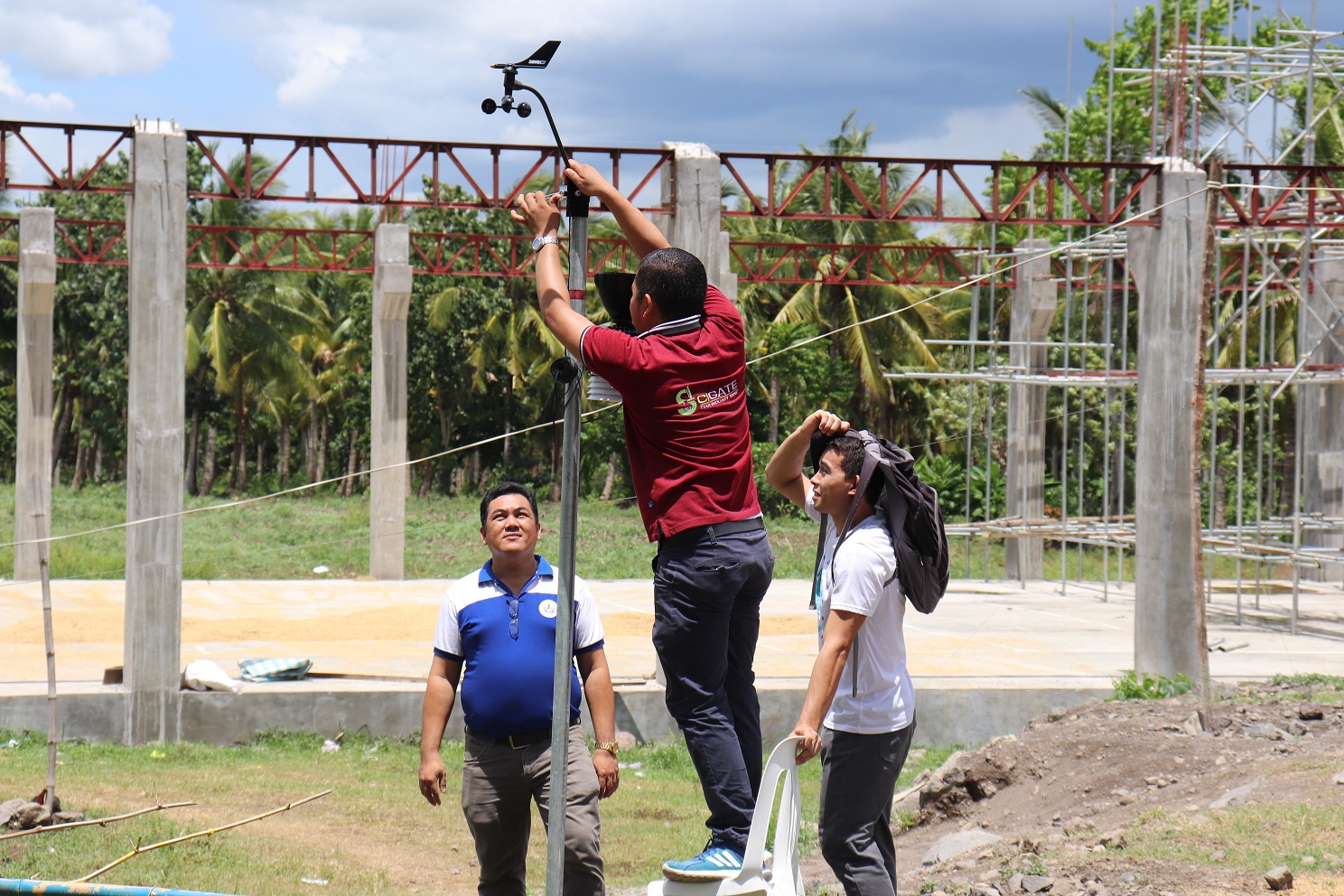 Accordingly, various municipal stakeholders were also capacitated in delivering Climate Information Services (CIS); this innovative approach serves as a significant early weather warning and decision tool for farmers and fisherfolks for their daily farm activities. The CIS is composed of a 10-day and 6-month regional, seasonal farm weather outlooks and advisories which utilizes weather data from the Philippine Atmospheric, Geophysical and Astronomical Services Administration (PAGASA) and features rainfall forecasts and wet/dry days per province per month, the prevailing weather systems, and incorporates impact outlooks and climate-resilient agriculture (CRA) practices with respect to the current forecast. 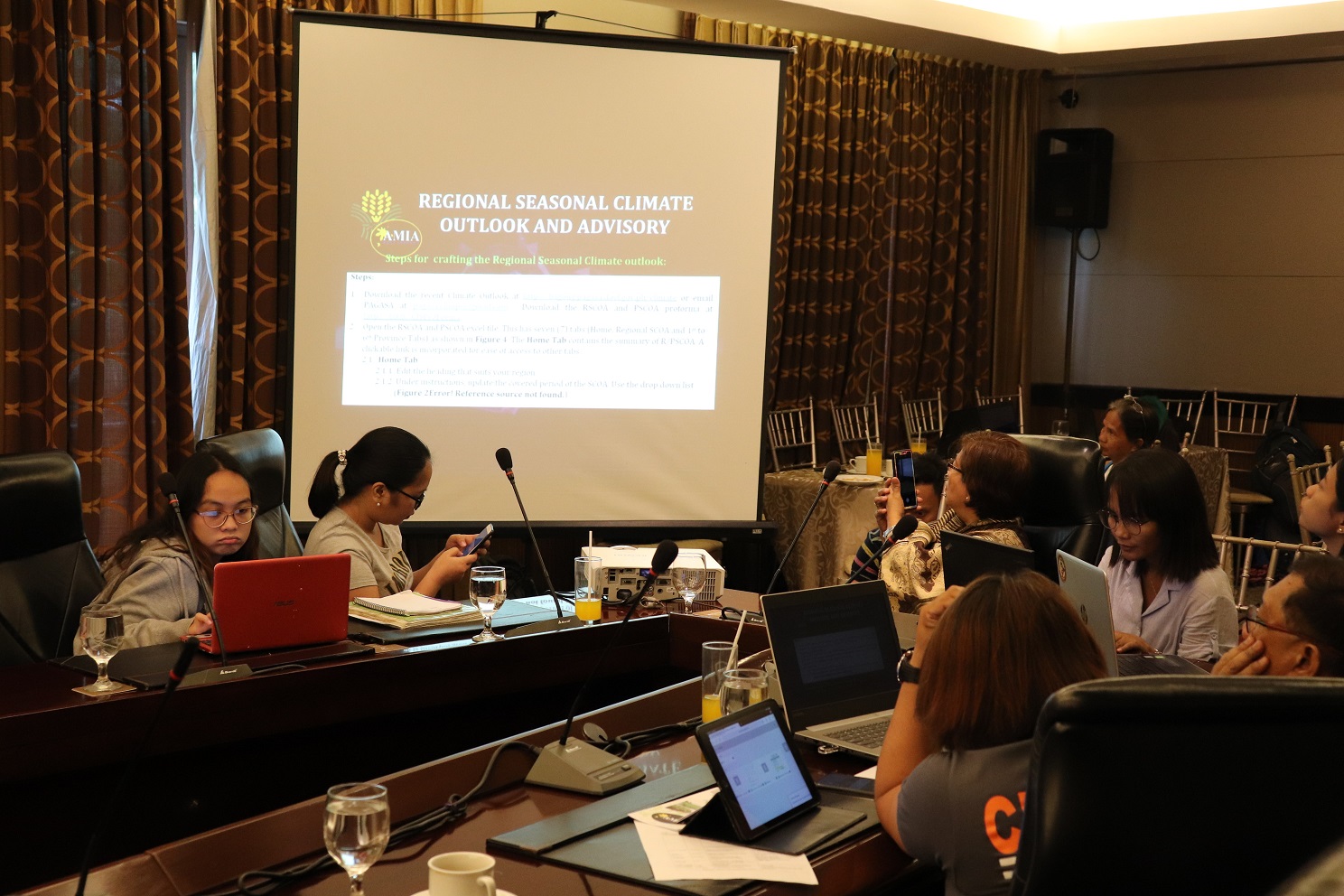 Additionally, two barangays from each of the municipalities mentioned above -- Brgys. Sta. Eulalia and San Francisco in Baao, Brgys. Mangayawan and San Francisco from Canaman and Brgys. Taban and Del-Carmen Del-Rosario in Minalabac were also capacitated and assisted in formulating their respective barangay-based DRRM plans for them to organize their disaster strategies and strengthen their responses to various calamities experienced within their communities. 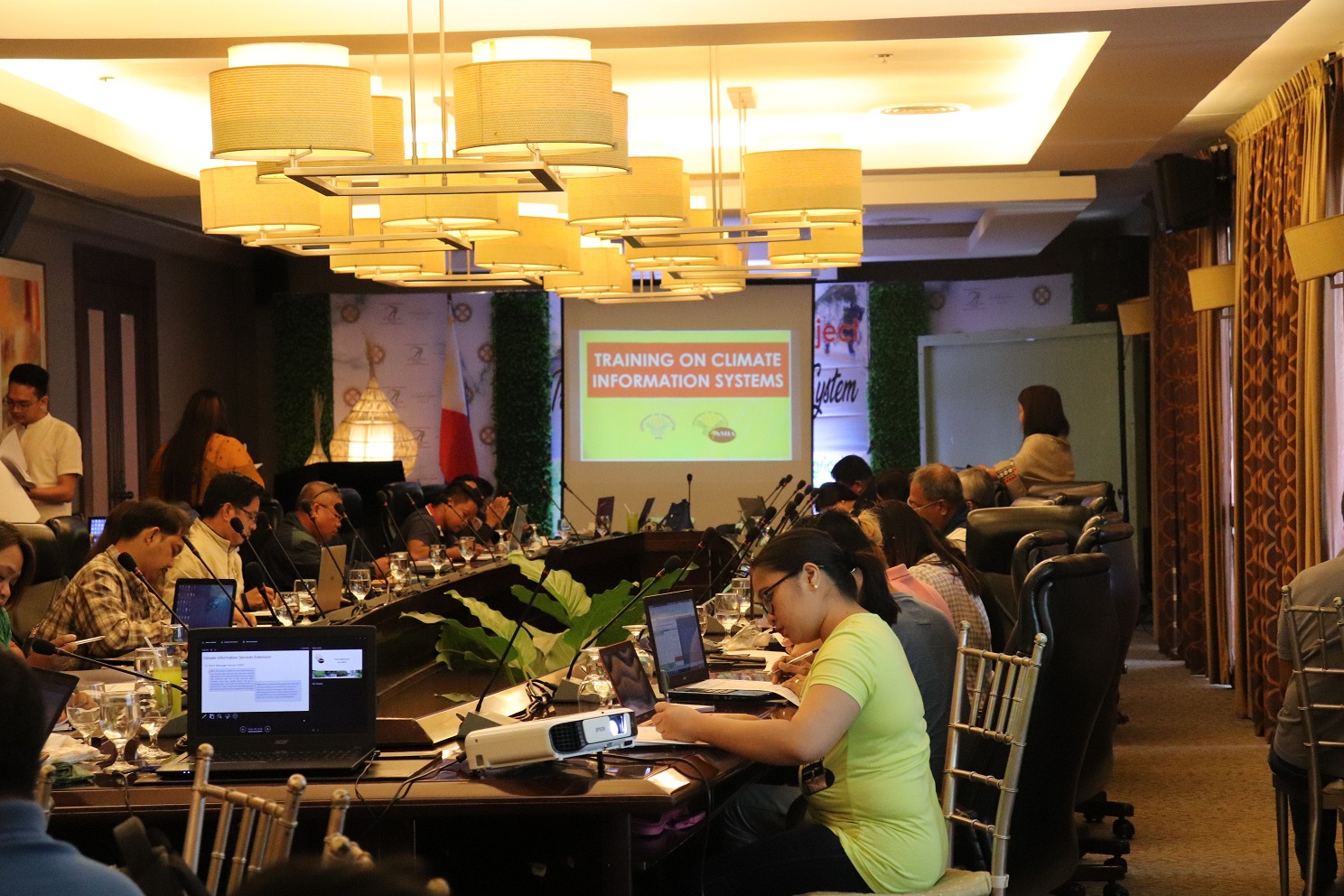 As part of the project's deliverables, the research team also launched a techno-demo farm utilizing the Integrated Rice Duck Farming system approach in each of the identified barangays from the mentioned municipalities to test its applicability as a potential CRA practice in the overall farming system of the region. This techno-demo approach is a low-cost, organic farming method where mallard ducks (Anas platyrhynchos) are allowed to forage in the rice paddy 20 days after rice transplanting up until the flowering stage, which is about two months later. While the ducks feed, they remove weeds, unwanted pests, soften the soil with their beak and feet movements and fertilize the soil with their droppings, thereby eliminating the use of commercial chemical fertilizers and biologics. 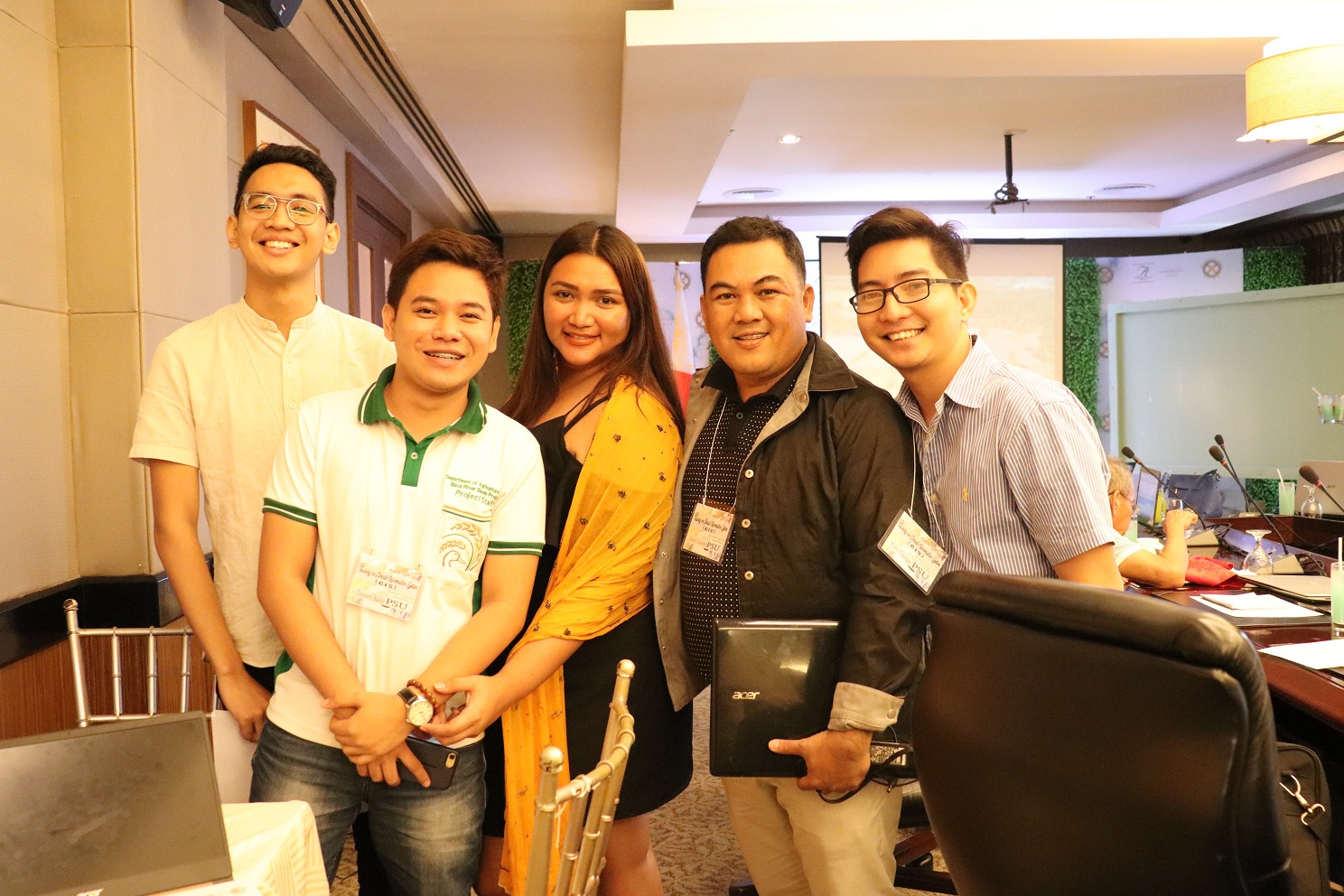 Also, in response to the emerging public health crisis, the research team also continued to deliver agricultural needs-based services to their farmers for food sustainability and sufficiency by distributing high-value crop seedlings, which can be cultivated to ensure stable vegetable supply within reach of their homes.

As the project nears from its conclusion, the research team believes that all their activities, among other minor but indispensable undertakings, can help contribute in a just transition on how we will perceive agriculture to transform into a climate-smart endeavor in the near future. With the increased pressure exerted by climate change to many vulnerable communities, especially here in our country, it is true that those who are more disadvantaged are impacted in a much profound way. Without access to modern farming techniques or machinery, let alone science-based climate and weather information, farmers’ livelihoods hinge precariously on a changing environment that they’re struggling to understand. Partido State University acknowledges this threat to productivity and sufficiency by empowering our marginalized farmers. Prioritizing their calls for support will be beneficial, primarily, because they remain one of the country’s economic backbone and pride of the working class. (R. Regalado)